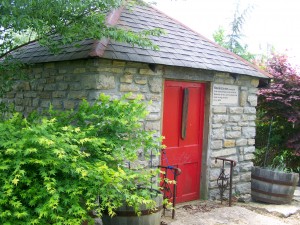 Prior to the development of refrigeration, meat was preserved by the following smoking process: first, the meat was cured by rubbing it with a mixture of salt, saltpeter, and sugar or by soaking it in a brine of this mixture. It was then hung in the smokehouse above a smoldering fire. After several days of smoking, the meat was removed and stored high and dry in the attic or under the roof of the smokehouse. Smoked meat could be stored for months without risk of spoiling.

The smokehouse adjacent to Jane’s Saddlebag is a rare example of one in Boone County, Kentucky, since few stone ones have survived lengthy exposure to the elements. In 2003, we had this smokehouse completely restored with all the original parts including the roof and hanging timbers.

History of Smokehouses (aka “Smoak” House)

Summertime, in the eighteenth century, was no time for eating fresh pork. The oppressive heat of the Middle Atlantic colonies turned the choicest cuts of meat into Petrie dishes of corruption. The day a pig was slaughtered, it was cooked and eaten, often as part of a family celebration or for the arrival of important visitors. Leftover meat was quickly shared with neighbors or slaves.

A frosty month, especially December, was the proper time for pig butchering, salting, and smoking. It’s a tradition documented to medieval times. The illuminated manuscripts known as books of hours, prestige prayer books, often depict pig slaughtering on their calendar page for December, in the same way that they show planting in March and harvesting in August. Killing the winter pigs was just another part of the annual agricultural round. 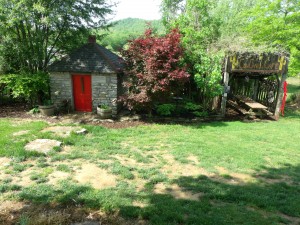 So if you expected to have pork all year long, you needed a smokehouse. From earliest times, a smokehouse was a small enclosed shelter, a place in which a fire could be kept smoldering for a few weeks, which would only slowly release its smoke, and in which the smoked meat could hang safe from vermin and thieves.

By the first half of the eighteenth century, “smoak” houses were regularly appearing in the backyard landscape.

To learn more and to see our restored smokehouse, come on down to Jane’s Saddlebag!